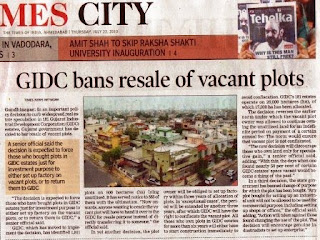 GIDC bans resale of vacant plots
TNN, Jul 21, 2010, 03.50am IST
GANDHINAGAR: In an important policy decision to curb widespread real estate speculation in 181 Gujarat Industrial Development Corporation (GIDC) estates, Gujarat government has decided to bar resale of vacant plots. "The decision is expected to force those who have bought plots in GIDC estates just for investment purpose to either set up factory on the vacant plots, or to return them to GIDC," a senior official said.

GIDC, which has moved to implement the decision, has identified 1,811 plots on 800 hectares (ha) lying unutilised. It has served notice to 553 of them with the ultimatum. "Now onwards, anyone wanting to resale the vacant plot will have to hand it over to the GIDC for resale purpose instead of directly transferring it to someone," the official said. In yet another decision, the plot owner will be obliged to set up factory within three years of allocation of plots. In exceptional cases', the period will be extended by another three years, after which GIDC will have the right to confiscate the vacant plot. All those who own plots in GIDC estates for more than six years will either have to start construction immediately to avoid confiscation. GIDC's 181 estates operate on 26,000 hectares (ha), of which 17,000 ha has been allocated.

The decision reverses the earlier norm under which the vacant plot owner was allowed to continue owning the unutilised land for an indefinite period on payment of a certain annual fee. The norm would ensure that vacant plot is not confiscated. "The new decision will discourage those who own land only for speculative gain," a senior official said, adding, "With this, the days when one found nearly 50 per cent of certain GIDC estates' space vacant would become a thing of the past."

In a third decision, the state government has banned change of purpose for which the plot has been bought. "Any plot bought for setting up an industrial unit will not be allowed to be used for commercial purpose, including setting up shops or offices," the official said, adding, "Action will taken against those found changing the use of the plot. The decision will encourage genuine industrialists to set up enterprise."
Posted by Comfort Realty Pvt Ltd at 4:14 PM No comments:

Role of Women in Real Estate

There are very few occasions when you will see women involved in the matters of property. Why? This is because women have always been treated as an ignorant section of the society having no role or say in any matter. In India, the condition of women is really miserable especially in the rural sectors. But now, as the country is developing at a rapid rate, all its sectors are witnessing considerable growth. Real estate sector is one of the most flourishing one and is continuously progressing having equal participation of men and women in it.
Women have gradually risen from their low status and are empowered by various government policies and relaxations. More and more women are now actively participating in buying properties and the different laws of the government regarding home loans and other property issues facilitate them in this task. If you want to know how it is beneficial for women to buy property then simply go through the following facts:

* If a women invest in ELSS (equity-linked savings scheme), deductions upto 1Lac can be claimed by her thereby saving a lot of money.
* Girls living in their parents’ house can help them to save and earn a lot of money. How? If you want to lease the house then deductions on the re-payment of home loan principal upto 1 Lac can be availed and also the total amount of interest paid as deduction as against the rental income can be claimed.
* If a girl and her parents jointly buy a house then deductions on the home loan that is shared can be easily claimed by her.
* Girls planning to get married can help their future husbands avail maximum tax benefits if the house is jointly owned. Also, she can reduce the repayment burden.
* Women in India are empowered by Income Tax Deptt. to adjust their loss against interest on home loans deduction limit. They are privileged to set off such loss amount to their salary incomes.

The women in today’s scenario stand at a same pedestal as men. She is independent, self-earning and intelligent enough to make decisions for herself as well as her family. A woman who owns a house automatically becomes more confident and secure. Also, investing in a home or any other property serves as a lucrative investment.

So, by reading this write-up you must have acquired a fair idea of the benefits a woman can avail if she buys a property in India. So, why wait then….grab the opportunity at the earliest possible.
Courtesy:realestateindia.com
Posted by Comfort Realty Pvt Ltd at 4:28 PM No comments:

Comfort Realty Pvt Ltd
Vadodara, Gujarat, India
Comfort Realty, a innovative thinking, professionally managed entity offering wide array of customized property solutions in Residential, Commercial, Property Portfolio Management & Investments, Research, Designing Solutions, Liasoning, Valuation & Advisory Services. We have extensive experience in advising a wide range of clients spread across country. Today we are recognized as setting the standards principally in the sale, purchase, leasing of broad range of properties including residential apartments, showrooms, hotels, Malls, Banks and commercial space.Our team comprises of specialists delivering highest standards of services, trustworthiness and professionalism. With an eye for detail and firm grasp of market, our aim is to deliver the best solutions for our clients. Comfort Realty, one of the experts in Real Estate Consultancy, founded in 1998 having corporate setup in Vadodara, spread across western India having offices in major cities of Gujarat, Maharashtra and Madhyapradesh. Today with over 50 professionals, Comfort Realty is a leading Real Estate Consultants providing customized solutions in Real Estate services.